This development of 51 affordable homes on the former Bronte School site at Keighley, is one of a number of projects LEDA have worked on with the City of Bradford Housing, which also includes; Braithwaite road, Cliffe lane and Avenham Way.

LEDA worked with the Architect Peter McDermott, and Wildgoose Construction to create a low energy scheme on this mixed tenure development, consisting of air tight homes with MVHR units.

Peter McDermott described the scheme as ‘a range of models that makes the development look almost like a village, rather than an estate, giving something back, from a design point-of-view, to the area’.

Tree preservation on site, plus protection of the South Pennine moors was a consideration, with a water attenuation scheme put in place to keep excess water in tanks before releasing at a controlled rate. 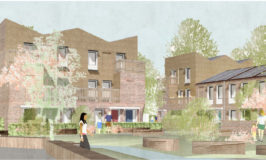 Find out more at www.ledaarchitects.coop